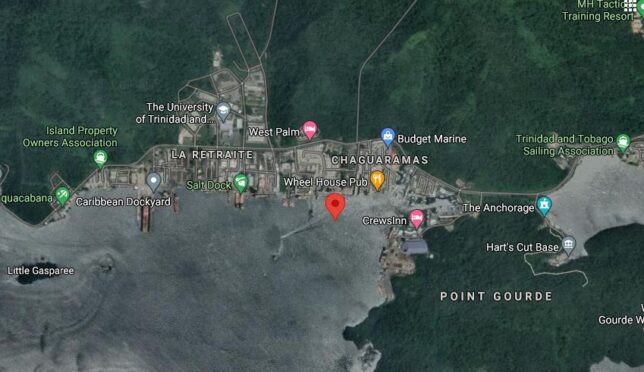 DATE: 2021-03-29 01:00
LOCATION: Trinidad and Tobago – Trinidad – Chaguaramas
EVENT: Theft
HAND: 2
STOLEN ITEMS: 9ft inflatable hard bottom dinghy with 9.8HP Tohatsu engine
SECURED: Not Locked
DETAILS: Between midnight and 6AM an unlocked, in-the-water dinghy / 9.8 HP Tohatsu outboard was stolen from a yacht in the bay while the owner slept onboard. The line had been cut. It is not known if a police report was made.
ID: 2623

DATE: 2020-10-25 01:00
LOCATION: Trinidad and Tobago – Trinidad – Chaguaramas – TTSA
EVENT: Theft
HAND: 1
STOLEN ITEMS: 14FT center console AB RIB with 40HP Yamaha outboard
SECURED: Not Locked
DETAILS: The TTSA sailing school dinghy was put onto a trailer and removed from the water late Saturday afternoon, anticipating relaunch and use Sunday morning. The trailer was left near the launch platform/ramp overnight. In the morning the trailer remained but the dinghy/outboard were missing. A police report was made and an investigation is underway.
ID: 2544

A recent attempt at piracy between Trinidad and Grenada has brought out the best in officials and stakeholders in Trinidad.  Demonstrating their commitment to the yachting and cruising community’s safety and security they responded quickly and effectively.  Organized escorted convoys with the Trinidad/Tobago Coast Guard (TTCG) along with radio monitoring by North Post Radio (NPR) for groups of 8-10 yachts wishing to make this passage are now available.  Additional convoys are currently being organized after a few trial groups worked with stakeholders and officials to fine tune the process.  Any yachts wishing to participate can initiate the process by utilizing this online form.   Yachts that transit individually are reminded the TTCG advises you file a float plan, receive their most up-to-date routing advice, and use normal lighting at all times, and AIS when possible.

A correction and additional information have been provided by the (uninjured) victims, who are undertaking yacht repairs. The yacht, based in Trinidad, is US flagged, not Trinidad flagged as our original report indicated. Additionally, the 8 pirates carried 6 weapons – 3 handguns and 3 automatic rifles, and apparently were speaking Spanish as they came within 20-30 ft. of the yacht, firing weapons, before abandoning the boarding attempt.

YSATT/TTCG/NPR have reiterated the importance of vessels making this passage to communicate prior to departure with a simple float plan. Notification allows for agencies to focus and allocate resources as well as activate patrols.

In most cases, patrolling vessels will NOT make themselves visible/known. Legitimate law enforcement approaches will utilize normal VHF 16 radio protocols and flashing blue lights. Yachts are asked to use normal lighting and AIS if it is enabled, and to consider traveling in groups.

They have updated the float plan form itself, which can be found on the CSSN website as well as on Jesse James’ website. Processes are being put in place to ensure all properly submitted float plans are acknowledged. Instructions are on the form itself.

North Post Radio (NPR) maintains radio coverage (VHF/DSC and HF) effective from the south coast of Grenada to Trinidad and are the best radio contact to use in any emergency en route. (VHF 16, HF 2182 khz). Additional modes of contact are included on the float plan form.

CSSN PRELIMINARY REPORT: A 53’ Trinidad flagged monohull transiting from Trinidad to Grenada with 2 persons onboard was approached by 8 pirates in an open piroque at 10:30 AM, at approximate position 11-24N, 61-36W, about 16 miles NNE of the Hibiscus gas platform, and 37 miles south of Grenada.

The pirates 40 ft. boat had 2 large outboards, was white/blue with an orange bow and approached from the east. The pirates fired warning shots into the air and indicated they wished the yacht to stop. It did not. Additional warning shots were fired as the helmsman attempted to use the VHF radio, which he did not. High seas prevented the piroque from successfully approaching and boarding as the yacht maintained full speed and began zigzag manoeuvres. Additional shots were then fired at the boat and helmsman, damaging the hull and coach roof, but no injuries were sustained.

The pirates gave up and fled the area at high speed to the west. Reports were made by the victims on arrival in Grenada to both Grenada and Trinidad/Tobago Coast Guard (TTCG).

Yachting Services Association Trinidad/Tobago (YSATT) indicates that TTCG are on “High Alert” and have added assets and increased patrols in the area. As the overall situation in nearby Venezuela is not expected to improve, plans are being formulated to form escort/convoys. Float plans filed with TTCG and North Post Radio remain the best method for communicating with officials there.

Additional details are expected and CSSN will update this report when they are received.