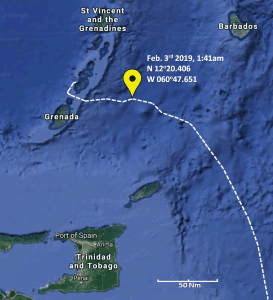 The captain was awoken and confirmed that the light configuration had not altered course or changed bearing. The yachts radar MARPA target confirmed that there was no change on the vessels course. The yacht took immediate avoiding action, turning hard to starboard to pass the vessel port to port. The vessel altered its course to intercept the new course of the yacht. Another avoiding action was taken by the yacht, turning hard to port to pass starboard to the now suspect vessel. The suspect vessel yet again took an intercepting course and MARPA indicated a collision and an increase in speed of the suspect vessel to 6 knots.

The captain and crew recognized the ruse and non-legitimate nature of the light display. The yacht went dark, and engaged the starboard engine. With both engines at full rpm, they fled the impostor vessel at approximately 11 knots. The impostor vessel appeared limited to a speed of 6 knots, and continued its pursuit, but did not identify itself via AIS or make any radio contact. The yacht continued to make course changes over the next several hours as the impostor vessel continued to follow. The yacht arrived in Carriacou the following day, and made reports to Customs and Immigration officials there.