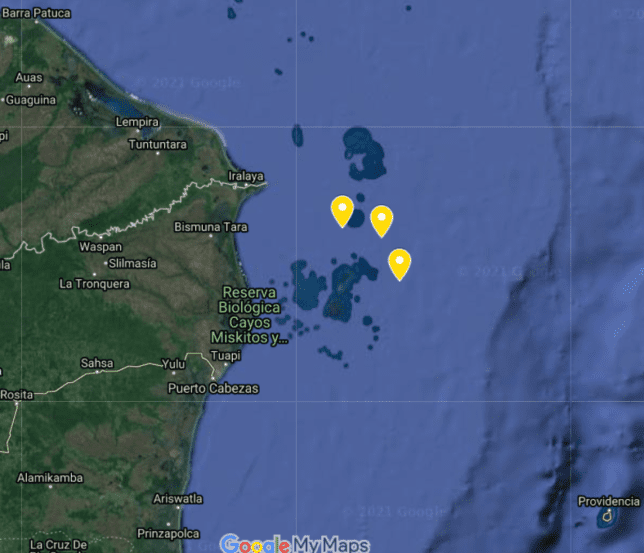 DATE: 2021-10-30 06:00
LOCATION: Nicaragua – Offshore
EVENT: Suspicious Activity
HAND: 1
STOLEN ITEMS:
SECURED:
DETAILS: A catamaran with 3 persons onboard departed Roatan, Bay Islands, Honduras, for Isla San Andreas, Colombia. At 0550 hours at position 14-45.8N 082-43.6W, approximately 35 miles off the Nicaraguan coast approaching the Edinburgh channel, they were approached by an open boat with 5 men onboard who began shouting for them to stop, coming as close as 75 meters, no weapons were displayed. The crew presented a show of force and the boat slowed and tracked the yacht but then departed as a squall reduced visibility.

At approximately 0800 at position 14-45.8N 082-43.6W the same skiff with 5 men returned at high speed with the bimini top removed and 2 of the men standing on the bow. They came within 25 meters of the yacht in rough seas holding a dead lobster. The crew presented a stronger show of force and aggressively shouted to get away while throttling up to 11 knots and making evasive maneuvers. After about 20 minutes the boat gave up and departed.

At 0945 hours, now 50 nautical miles offshore, (N14-31.4N 082-26.3W) two different skiffs containing 11 men approached at high speed from port with one moving to approach from the stern. The yacht resumed evasive maneuvers and again presented a show of force. The 2 skiffs regrouped about 100 meters behind and tracked for 30 minutes before disappearing.

The yacht continued to San Andres without further incident. A report was made to the Port Captain and the Colombian Coast Guard. A report to the home country consulate was planned.
ID: 2704