Kick ‘em Jenny is a submarine volcano located about 5 miles or 8km north of Grenada at 12.18 degrees North and 61.38 degrees West. The underwater volcano should not be confused with the island known as Kick ‘em Jenny or Diamond Rock, just a mile to the northeast of the volcano. The last eruption of Kick ‘em Jenny occurred in December 2001. At that time, vulcanologist carefully monitored the activity, using equipment installed both at the volcano itself and in the town of Sauters, on the north coast of Grenada. 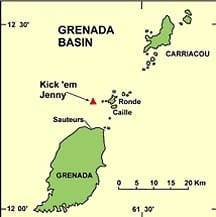 During a research expedition in March 2003, scientists from the University of the West Indies Seismic Research Unit, the National Oceanic and Atmospheric Administration, and the University of Rhode Island discovered three craters (C1, C2 and Kick ’em Jack) and two domes (D1 and D2) near Kick ’em Jenny. Further investigations are needed to confirm whether these are separate ‘live’ volcanoes. The Seismic Research Unit of the University of the West Indies is the agency responsible for monitoring earthquakes and volcanoes for the English-speaking islands of the Eastern Caribbean as well as the Dutch islands of Saba, St. Eustatius and St. Martin.

Submarine volcanoes release large quantities of gas bubbles into the water, even in quiet times between eruptions. This can lower the density of the seawater above the vent. This is very dangerous to shipping, because boats entering a zone of lowered water density will lose buoyancy and may sink. For this reason scientists at the Seismic Research Unit, in collaboration with the government of Grenada, have instituted a 1-mile/1.5km exclusion zone around the summit of the volcano for pleasure craft and non-commercial traffic. The volcano is currently at a yellow alert level. If the alert level goes to orange or red, the exclusion zone will extend out to 3-miles/5 km from the summit of the volcano.